The Fujifilm X-E3 is a mirrorless interchangeable lens camera that was officially introduced in September 2017 and is equipped with an APS-C sensor. It offers a resolution of 24 megapixel.

Is the Fujifilm X-E3 a good camera? The X-E3 has a Camera Elo of 2710. This rating puts the X-E3 among the top 40 percent of all mirrorless interchangeable lens cameras. In terms of its sensor size category (APS cameras), the X-E3 ranks among the top 20 percent. Based on its within category standings, the camera earns a 4-star performance rating. 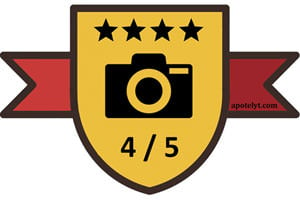 The side-by-side display below illustrates the physical size of the Fujifilm X-E3 vis-à-vis a credit card. Three successive views from the front, the top, and the rear are shown. All width, height and depth measures are rounded to the nearest millimeter.

The table below summarizes the key physical specs of the Fujifilm X-E3 alongside a set of comparators. If you want to review a camera pair side-by-side, just select a right-side comparator from among the camera models in the table. Alternatively, you can also move across to the CAM-parator tool and choose from the broad selection of possible comparisons there.

The listed prices provide an indication of the market segment that the manufacturer of the cameras have been targeting. The Fujifilm X-E3 was launched in the US market at a price of $899. Usually, retail prices stay at first close to the launch price, but after several months, discounts become available. Later in the product cycle and, in particular, when the replacement model is about to appear, further discounting and stock clearance sales often push the camera price considerably down. Then, after the new model is out, very good deals can frequently be found on the pre-owned market.

The size of the imaging sensor is a crucial determinant of image quality. A large sensor will generally have larger individual pixels that offer better low-light sensitivity, provide wider dynamic range, and have richer color-depth than smaller pixels in a sensor of the same technological generation. Further, a large sensor camera will give the photographer additional creative options when using shallow depth-of-field to isolate a subject from its background. On the downside, larger sensors tend to be more expensive and lead to bigger and heavier cameras and lenses.

The Fujifilm X-E3 features an APS-C sensor and has a format factor (sometimes also referred to as "crop factor") of 1.5. Within the spectrum of camera sensors, this places the Fujifilm X-E3 among the medium-sized sensor cameras that aim to strike a balance between image quality and portability.

For most cameras, data on sensor performance has been reported by DXO Mark. This service assesses and scores the color depth ("DXO Portrait"), dynamic range ("DXO Landscape"), and low-light sensitivity ("DXO Sports") of camera sensors, and also publishes an overall camera score. The adjacent table reports on the physical sensor characteristics and the outcomes of the DXO sensor quality tests for a sample of comparator-cameras.

Many modern cameras cannot only take still pictures, but also record videos. The X-E3 indeed provides movie recording capabilities. The highest resolution format that the X-E3 can use is 4K/30p.

Apart from body and sensor, cameras can and do differ across a variety of features. For example, the X-E3 has an electronic viewfinder with a resolution of 2360k dots. The viewfinder offers a field of view of 100% and a magnification of 0.41x. The adjacent tables list some of the other core features of the Fujifilm X-E3 along with similar information for a selection of comparators.

It is worthwhile pointing out that the X-E3 has a touchscreen. Touch control can be particularly helpful, for example, when trying to adjust the focus point.

For some imaging applications, the extent to which a camera can communicate with its environment can be an important aspect in the camera decision process. The table below provides an overview of the connectivity of the Fujifilm X-E3 and, in particular, the interfaces the cameras (and selected comparators) provide for accessory control and data transfer.

While the comparison of the spec-sheets of cameras can offer a general idea of their imaging potential, it remains partial and cannot reveal, for example, the handling experience and imaging performance when actually working with the X-E3. User reviews that are available, for instance, at amazon can sometimes shed light on these issues, but such feedback is all too often partial, inconsistent, and inaccurate. This is why hands-on reviews by experts are important. The table below summarizes the assessments of some of the best known camera review sites (cameralabs, dpreview, ephotozine, imaging-resource, photographyblog).

The review scores listed above should be treated with care, though. The assessments were made in relation to similar cameras of the same technological generation. Thus, a score needs to be put into the context of the launch date and the launch price of the camera, and rating-comparisons among cameras that span long time periods or concern very differently equipped models make little sense. Also, please note that some of the review sites have changed their methodology and reporting over time.

Below are some additional questions and answers concerning some particular features of the X-E3.

What technology is the imaging sensor in the X-E3 based on?

Fujifilm equipped the X-E3 with the X-Processor Pro image processor.

What is the ISO sensitivity range of the X-E3?

What is the life expectancy of the shutter in the Fujifilm X-E3?

Fujifilm does not publish a shutter rating for the X-E3. Yet, shutters in comparable cameras from other manufacturers are said to be good for at least 100 000 actuations. It should be noted, though, that this number represents a Mean Time before Failure. The shutter might fail earlier, or it might last longer. Anyway, in order to exhaust an expected shutter life of 100 000 shots over, say, three years, one would have to take about 100 pictures each and every day.

How do I find the shutter count on my Fujifilm X-E3?

Fujifilm embeds the number of shutter actuations in image metadata. You can check the number of shots that your X-E3 has taken up to now by uploading a recent image to the online shutter count app.

Is completely silent shooting possible with the Fujifilm X-E3?

No, the Fujifilm X-E3 has an intervalometer built-in, so that low frequency shooting (for example, flower blooming, sunset, moon rise) can be undertaken without the need to purchase a separate external intervalometer and related software.

Is it difficult to use manual focus lenses with the Fujifilm X-E3?

The X-E3 offers focus peaking as a manual focus aid. This feature works by placing a colored highlight on in-focus zones within the image.

Does the Fujifilm X-E3 feature an autofocus assist light?

Which battery does the X-E3 use?

The camera gets its power from the NP-W126S (here at amazon), which is a rechargeable Lithium-Ion power pack.

Where can I find the best deals for the X-E3?

Grey imports from Asia, as found on eBay, are often very attractively priced. However, these cameras come without a warranty from Fujifilm.

If you would like to see a side-by-side review of this and another camera, just use the search menu below. There is also a set of direct links to comparison reviews that other users of the CAM-parator app explored.